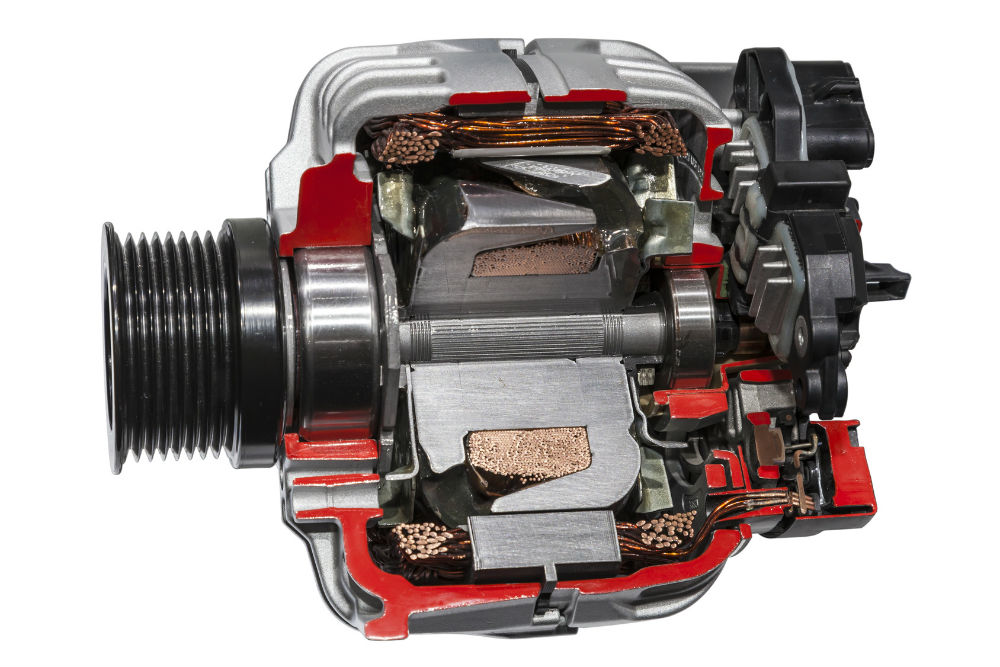 What is the Difference Between an Alternator and a Generator

Alternators and generators are very similar in the sense that they do just about the same job. Functionally, both machines are capable of converting mechanical energy into electrical energy.
Their primary function is the same, however, that’s where the similarities end. When it comes to the physics, efficiency, and power output behind each one, it’s good to really know what is the difference between an alternator and a generator.

Before that, let’s define what an alternator and a generator are first.

Alternators are commonly used to charge car batteries and make sure that all electrical components of the vehicle are charged and running. In an automotive, three components are used to charge up a vehicle: the voltage regulator, the battery, and the alternator.

The battery and the alternator work hand in hand to create and bring power to all the parts that need electrical energy, such as the lights, the panel, and the radio.

Compared to alternators, generators have more large-scale, industrial purposes. These devices often run on gasoline or petrol, similar to a vehicle. They are primarily used as a power source for homes and businesses, especially in case of emergencies.

They are the ones that are also commonly used as a power source for outdoor work, at construction sites and lumber yards, as well as for camping and outdoor trips.

In terms of how they work, what is the difference between an alternator and a generator?

Aside from their functions and capacities, how else are alternators and generators different from each other? The answer lies in how they work. They each have similar parts, yet some important nuances cast their differences from one another.

Both devices rely on the principles of electromagnetic induction, but the absence of a commutator makes an alternator a more straightforward machine that requires less mechanical attention and repair. But, this does not mean that the generator is a weaker device. Alternators are simply more economical.

In terms of efficiency, what is the difference between an alternator and a generator?

As noted above, alternators are a bit more economical than generators. This also means that they produce a higher output relative to the input needed.

Alternators’ brushes are also said to last longer because they are not used as much throughout the process of energy generation. This gives it another edge in efficiency, as it means fewer parts to repair.

In terms of AC/DC power, what is the difference between an alternator and a generator?

AC power is commonly used in households and businesses, as it is the standard electrical current found in electrical outlets. DC is found in electronic devices that rely on batteries, such as cell phones, alarm clocks, and portable speakers.

As its name suggests, an alternator runs on AC power. Because of this, the power produced by an alternator must first be converted to DC power before being utilized by the car’s battery.

In terms of usage, what is the difference between an alternator and a generator?

As mentioned above, alternators and generators are also different when it comes to where they are used. Alternators are most commonly found in cars, assisting the battery to power the automotive and have all the electrical parts up and running.

Meanwhile, generators are used in both residential and industrial settings. They are used as emergency power sources in the event of blackouts and storms; and are also used for outdoor activities and jobs.

What is the Difference Between an Alternator and a Generator: The Conclusion

Though alternators and generators are rather similar in what they do, which is converting mechanical energy into electrical energy, they also have their differences. One of the primary differences between the two devices is in their usage. Alternators are more commonly found in automobiles, as a part of the three components that charge a car, together with the battery and the voltage regulator. Meanwhile, a generator is used as a power source for homes and businesses, and for outdoor usages, like camping trips and construction work.